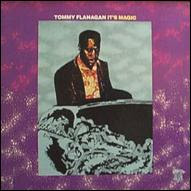 As promised, here is a nice recording by Tommy Flanagan. This dude was a workhorse playing om some of the finest lps ever recorded by many many artists. But he didn't really come into his won as a leader until later into his career. I really wish I would have held onto some of those later Muse lps i had at one time. I bet I would appreciate them much more now.

This is a pretty straight ahead bop session from 57. The standards medley may be the highlight.

Flanagan may not have set the world on fire but he certainly should be remembered. I am glad to contribute one of his own efforts here.

Of course, not to be missed is his work on the previous post of Wilbur Harden Quartet's "King and I" set.

the usual disclaimer of late; recorded from a vinyl version of SJL 1158
Posted by Hookfinger at 6:17 PM

Thanks for this rare flanagan record!

But this LP was in bad shape. Lots of impulse noise.

Thank God for Click Repair! Scrubbed up the data to "almost new" condition.

Thanks for this one. I also took the John Graas and will see how far I can get with a restoration. If it comes out good I'll send it to you.

Thank you very much for your music.
Have a nice day.
bye bye