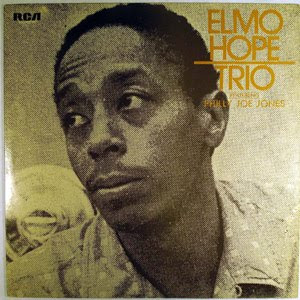 Once again an image of my actual lp escapes me, so the photo of Mr Hope at the piano will have to suffice. (edit: Thanks to farlac for the cover and stating the obvious.)

Elmo Hope seems to some how have slipped into a position slightly behind Monk and Powell and just ahead of Herbie Nichols. In other words, everyone I know has at least heard of Monk, and quite a few more may be aware of Bud Powell, but only my friends who are at least somewhat involved with jazz have heard of Elmo Hope. 'Tis a shame.

I have always perceived Elmo Hope as a leader, not a sideman even though he has appeared on many records in that role. It is on his own songs that Hope really tends to shine. This record splits the songs evenly between his own and covers. Of course Night In Tunisia is familiar to most but he really brings it on the introspective I Love You by Porter, and again on the final Gershwin cover.

The songs on this lp are some of his last, I suspect, as he ODed early the next year. But these recordings are far from a man that is wasting away. I have always found these songs full of joy, an artist at his peak. Of course I may be wrong, what do I know? But this is a record have chosen not to part with over the years, and I am happy to share it here.

Undoubtedly these songs have appeared elsewhere but here they are, from a vinyl lp (again) that appears to be a Japanese issue of earlier release under the RCA imprint.

I put in RVJ-6019 into google and the very first link gave me a huge cover scan! You must not have tried too hard ;)

FYI - Just discovered your blog and have no idea if you (or anyone) will actually read this comment. I have a dear love of Elmo Hope (and jazz in general, and piano jazz is a special interest) and want to set this one straight. First, Hope didn't OD in spite of his lifelong drug troubles - he died of pneumonia. Second, this is part of a two record set first put out in the mid-70's simply called "The Last Sessions." I have it as part of a simply wonderful 4 CD Gambit set called "The Complete Elmo Hope Trio Recordings." This is probably the place to start with Hope (not only is he best as a leader, I also find that he's best in a trio format, the Blue Note Quintet sessions notwithstanding). If you'd like a post of these, or any Hope records (I have them all) I'd be happy to do so. Just say so in the comments.

Just to set the record straight: Hope didn't OD (in spite of a lifelong drug problem that put him behind bars a few times), but rather died of pneumonia. There are a mix of the last two sessions he recorded, and was originally released as a "vol 1" and "vol 2" set as "the Last Recordings." I have them as part of the wonderful Gambit CD set "The Complete Trio Recordings of Elmo Hope." For what it's worth, I find the trio sessions to be his best, the Blue Note quintet sessions notwithstanding. Regardless, I have all of his music, and would happily post more if you like.

disink - thanks for clearing that up, I am not sure where i got the bad info. Been so long since i heard it, I never bothered to check my facts. And thanks for looking around. Hope you find other records you like.

Thanks. I helped run one of these sites back in 2006 (it was called Jazz Pour Tous and I ran it with a guy named Glaikit and another named Medi - can't imagine many would remember) but haven't been around for a long time. This is great! Found some nice rarities (thanks in particular for the Jimmy Giuffre and Mal Waldron stuff). By the way, you can kill one of my commments - I have no idea why there was a post delay and so I posted twice thinking my first comment had vanished into the ether! Both say pretty much the same thing. Thanks again.

great post
I discovered Elmo only a few days ago in a very occasional mode - But I found him wonderful - But I can't find any other records - Would you help me in finding more Elmo's recs? Thank You A lot