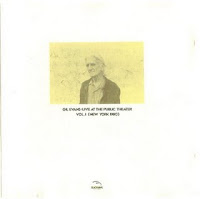 I've been playing it safe the last few posts it seems. Time to offer something different again.

This record is something I picked up on a whim once, and it took many many years of barely occasional listening for it to click. Eventually it did.

Gil's electric piano is sometimes distracting as are the blips and beeps from a couple of synths, but on the whole this record is what jazz can be when we don't limit ourselves to conventional thinking.

One thing I did notice when ripping this record is that two of the ensemble players that I was sadly unaware of are now to be listed among my favorites. A situation that i can credit directly to my involvement with CIA, and those are Arthur Blythe and Hamiet Bluiett.

While this records is purported to be a live recording, the audience noise is kept to a bare minimum until near the close of the show. And of course there is the inclusion of a Hendrix track as we have come to expect from Evans.

Settle back and see if the genius of Gil Evans doesn't show through for you, as it finally did for me.