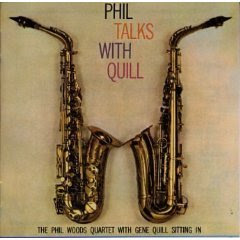 Can you tell them apart? I can't. No shit, their styles are that similar. It could have made for an outing that was more novelty than not, but these guys managed to avoid it and put out a great little straight ahead post bop lp.
Other than the Woods original, Hymn For Kim, all the other tracks are standards from the bop idiom, oddly enough bookended by a pair of versions of Doxie.
Both are sufficiently different from each other to make this an interesting idea in its own right.
This record is a perfect example of where jazz was at at the end of the 50's. This was recorded in 57 but not released until 60.
Very soon the real fire of post bop would start emerging and jazz would start growing again. Till then there were still some very good records being released. And while not all would set the world on fire, like this one, they still do not deserve to languish in complete obscurity.
Gotta say, I loved burning this record, seeing as how I had not listened to it in many, many years.

for the record - Woods takes all the 1st solos except on Tunisia where Quill solos initially.
Posted by Hookfinger at 6:00 PM

Thanks, I have that four altos recording on prestige where I was straining my ears to differentiate the players, so this should be at least 50% easier.