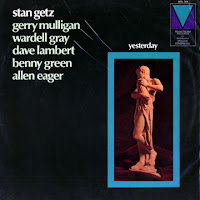 Here's something I have been carrying around awhile. I had no idea people were having trouble finding it so it is with great pleasure I present it here.

Make sure you jump over to the Shad Shack for more great stuff like this.

The Stan Getz sides were recorded in 1948 but there is no info on when the other tracks were recorded, but given the similarity of personnel, I would assume it was near that time as well.

I just returned today from a couple days on the road at client sites - and was miserable. It was a crappy few days but seeing this when I got home today has put me in a much better mood!

I'll "hook" it up at the shad shack right away!

Hi
Thank you very much for let me to download your music
Thanks a lot..
My best regards
You have a incredible blog !!
Pedro

Thanks for this one, Hook! (thanks also for your recent comments on my blog, much appreciated!)

2 things...1st what a nice blog..
2nd, thanx for the sweet LP
it has been on my watch list for LIKE ever.. I did buy a copy off Ebay but even though it said VG it was more like foobar.. ~ rick

Great blog! Quick comment on this one in case anyone's having trouble finding a copy of it on LP. This was reissued (same song sequence) as the first record of a 2LP set in 1974 (MRL 804). The set is entitled 'Helen Merrill - Mixes'...the 2nd record in the set is a reissue of 'The Artistry of Helen Merrill'. There's a track listing on Discogs, and a good picture of the LP on Amazon.