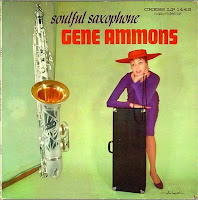 Gene Ammons is not the best known tenor around. Nor the most loved. But he is good at what he does, and that is that big FAT tenor sound.

What I have for you here are couple of Ammons lps. The first is a Chess release that I don't see round much, the other a Prestige lp that you shouldn't have too much trouble running down.

Since both are short they are being included here together. They will fit on a disc nicely. 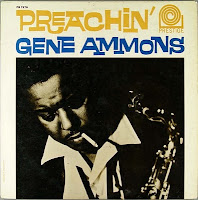 This second lp was Prestige released with credits listed only as "organ, bass, and drum accompaniment."

This record probably has more soul than the last record.

I don't know if it is the gospel undertones on this lp that make feel so fulfilled...or just that big ole saxophone!

RE:Gene Ammons-Soulful Sax This is a great old LP Thanks very much for it. I wonder if you have tried click repair on any LPs. It is truly the best out there for cleaning up old LPs. http://www.clickrepair.net/ It has a fully functional 21 day trial period. Some I have done with it can be found at my blog http://yellowdaysvinyl9.blogspot.com/ or here at http://jazzy62-jazzyblues.blogspot.com/ Look for posts by deGallo such as Robert Conti, Mary Osborne etc. Thanks

He deGallo - nice to see ya round these parts. thanks for the info on clickrepair. i have tried several programs but i am "computer challenged" and nothing seems to work for me. I am not recording directly to the PC but to disc and then importing it to itunes. I will check out you link though. Email me as I would like to talk more.