Cannonball Adderley - Fiddler On The Roof 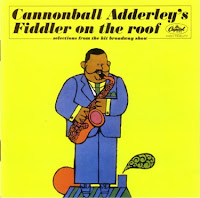 Its the change of seasons..the snowfall actually makes it feel like winter. And for some reason, early winter makes me feel like Fiddler On The Roof. I watch the movie once a year maybe, but always at this time.

Fiddler On The Roof is one of Broadways most beloved musicals and Cannonball makes it uniquely his own.

It would be hard to single out any solos on their own but this lp abounds with plenty. Instead just listen to the album in its entirety to feel the special mood, one like I said is fitting for this time of year.Titles of three selections in this package do, however, require explanation.Fiddler on the Roof in the show itself is also called Tradition. The Bolero-tempered Chavalah is strictly a dance sequence in the show, and does not appear in the original cast recording. Cannon, however, found it perfect in the context of this recording. Sewing Machine was deleted prior to the Broadway opening, but Cannon liked it so much he felt that it too should be included on this date. *

*the last paragraph is culled from the liner notes.

Posted by Hookfinger at 7:02 PM

Love Cannonball's Fiddler on the Roof! And yes, winter is the perfect time for it.

Thanks for reminding me how much I enjoy the play and the music.