Artie Shaw and The Gramercy 5 - the last recordings 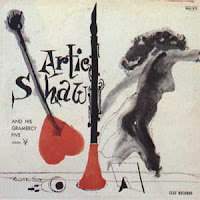 My first thought is "Who doesn't love a great Stone Martin cover?"

What I have here are apparently some of the last recordings made by Artie Shaw before he launched into star-studded retirement. Here's a fellow who knew how to go out on the top of his game. Or was the music world gonna leave him behind and he was smart enough to realize it? I recommend everyone read "The Trouble With Cinderella", a top notch autobiography. But back to the music at hand...

This shit swings. Swings hard. Small group swing. Which was terribly out of favor at the time. The first track "The Grabtown Grapple" wrestles with some new sounds (for the time,) but the rest is firmly entrenched in the swing era. Cool with me.

I know next to nothing about these records, and while the information is out there, I have only a couple of blank cassette cases, with no way of knowing which versions of the songs I am hearing.
Some I am confident on, some not so. Doesn't stop my enjoyment of these records one bit. 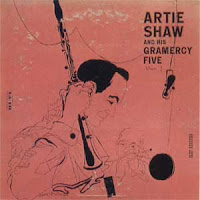 Years ago there was a fellow who sold records, jazz records through the mail, G's Jazz outta WI. Guy named Gary, but Gary was cool and if you couldn't afford some of the crazy prices that original jazz lps commanded, he would make you cassettes of them... for a price of course.

Unfortunately you got nothing but a cassette - no lp info. That's where these recordings come from. From his vinyl to my cassettes to disc to you.

Artie Shaw and the Gramercy Five
Sequence In Music
1. The Grabtown Grapple
2. Lugubrious
3.I've Got A Crush On You
4. Tenderly
5. I Can't Get Started
6. Lyric
7. Imagination
8. Sunny Side Up
9. When The Quail Come Back To San Quentin

Great story behind the album / tape / disc -- I can't wait to hear the actual music!

First heard the Gramercy 5 on a compilation album and was hooked! Looking forward to this. And, yes, who could resist a David Stone Martin cover?

Thanks for this one. The personnel for this 1954 session (about 10 years after the last of the more famous Gramercy 5 sessions) was
Shaw
Joe Roland vibes
Hank Jones piano
Tal Farlow guitar
Tommy Potter bass
Irv Kluger drums
Not a bad line-up !

Great stuff, as were the earlier Gramercy 5 recordings! I believe ALL of these late sessions are available on 4 cds in Artie Shaw: The Last Recordings, Vol. 1: 1954 (recently reissued on Nimbus) & "More Last Recordings (on Music Masters Jazz & OOP, but check Amaz. mktplc.). Well worth these!

Sounds like a wonderful recording and an invitation to search for more David Stone Martin - beautiful touch in the brushwork, bold graphic sense in the treatment of the individual forms and the caligraphic title is as wonderfully sloppy as the contemporary Ed Fella. What a discovery. Many thanks.