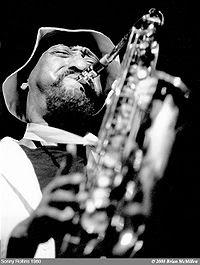 Here's another thing that I had to transfer over from cassette. Got this as a member of IAJRC. They had a "lending library" where you could get copies of some odd shows. I got this, a Mingus Big Band show and a long interview with Hawkins, which I erased half of accidentally. Those were the days....

This is originally taken from a BBC radio show. The performance was recorded at Fairfield Hall, Croydon, U.K.

I have taken the original BBC intro and moved it to the end, as well as an interview with Rollins that was the radio "break". This way the concert is all in one piece and you can listen to the conversation separately.

I have not been able to identify a couple of the songs. Help requested.

Thank you alpax for supplying the missing titles!!

i think the drummer is named "tommy" not "connie" but i might be wrong. you might want to investigate for your own records. thank you so much for sharing this set as well as all of this other great music, by the way.

that's so sad rogjazz. Perhaps if you learned some manners and asked nicely they could be reposted.