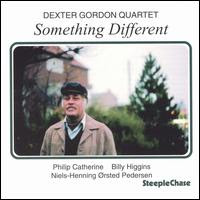 Another great late period Dexter G. record that I never see around. This time with two great European jazz artists and ex-pat Billy Higgins. The inclusion of Philip Catherine on guitar is not something I would generally look forward to, but damn if this isn't a fine set.

Covering Miles is always a risky idea, and covering this classic takes guts, but they pull it off phenomenally.

Once again Dexter shows his masterful interpretation of ballads and that fluid subtlety I love so much on the slow numbers. Throw in a little bossa nova, and you get a well rounded picture of this lp.

So glad I'm here. I keep saying that music bloggers are special kind of people, generous and deeply into music enough to share with other music lovers. I appreciate your generosity. Dexter Gordon is a national treasure and this album is new to me. Thanks.