I guess this would be the first of those oddball posts I was talking about earlier. The ones where sharing the music really is foremost.

You see this post consists of pieces of two lps. Most of the one at your left and another Savoy reissue under Chuck Wayne's banner.

I have never seen either of the two on disc nor hanging around the blogoshpere much.

The first - the Good Ole Zoot lp is culled from two sessions. The first (a) is a quintet recording. Unfortuately one track from this lp was too warped to be salvageable and it was from this session. This missing track is titled Toot No.2.

The second session (b) is actually a Chubby Jackson session. (Damn, I have some great Chubby Jackson on cassette around here that I need to locate.) I still love the big band sound even when it was falling out of style. Actually even more so, when the young dudes tried keeping it alive. Even though Georgie Auld would hardly be considered a hip new guy, and as usual there is the inclusion of a couple of fellows who found this to be their fleeting claim to fame. 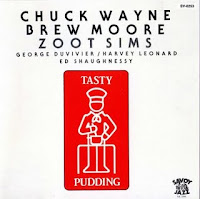 The final session(c) was actually attributed to Chuck Wayne and also consisted of several sessions. From the lp at left we have culled the only 4 songs thatZoot Sims played on.

The rest of the lp is fairly uneventful, but the Sims songs manage to be a pretty good time. Oddly there were 8 tracks cut this day with Zoot only playing on 4 while relatively unknown Brew Moore blew sax on the other 4. Hmmm, what were they thinking?

The thing you all have been waiting for....

Luis - thanks so much for the missing track!!

Thanx for the treats, Hook. I'm pretty sure the Chuck Wayne recording features Brew Moore on tenor. Zoot could be on some tracks. I had to let you in on my thots. Brew was a favorite with that sideways horn in his mouth.