Coleman Hawkins Quartet - The Jazz Version of No Strings 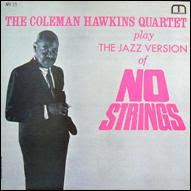 Here's another in honor of Bean's birthday this weekend. I really don't see this one about much, so here ya go. as usual, ripped from the vinyl.

This quartet is the same one that recorded Today and Now for Impulse and that record remains one of my favorites to this day. There is not nearly as much stretching out on this lp, not surprisingly as it was released under the Moodsville imprint.

Apparently No Strings - the play - has the distinction of being the first for which Richard Rodgers wrote both music and lyrics. Guess the lyric part is kinda pointless here.

If the liner notes are to be believed this lp was recorded within weeks of the show opening on Broadway. Rodgers moved the orchestra from the pit and behind the stage with soloists wandering on stage to accentuate certain moods. Sounds interesting. I wonder if it worked. The show itself opened 3/15/62.

The Coleman Hawkins Quartet
The Jazz Version of No Strings

1. Look No Further
2. La La La
3. Nobody Told Me
4. Maine
5. Loads Of Love
6. The Sweetest Sounds
7. Be My Host
8. The Man Who Has Everything
9. No Strings
Coleman Hawkins - tenor sax
Tommy Flanagan - piano
Major Holley - bass
Eddie Locke - drums

Thanks for this one!

This is actually the only Coleman Hawkins studio album that hasn't come out on CD (some tracks were on a compilation) so big thanks for it!

Coleman Hawkins - The Jazz Version Of No Strings

Over two years later and I have finally burnt this to CD and listened to it. Man, this was a noisy copy! But it is in stereo and there are no skips which are definite plusses.

The tunes are somewhat memorable and the group plays well, but this has fallen through the cracks in the CD reissue era. The two tracks that have appeared on a CD compilation are "Loads Of Love" and "The Sweetest Sounds".

shameful that this hasn't been properly digitized yet. i love hawkins work during this period of his career.