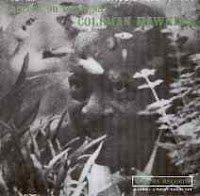 This is the last of the posts for Hawks birthday. While not the rarest, it is still not seen often, and remains one of my favorites as well.
This lp is a perfect example of how Hawk was straddling two camps. His playing is as lightning fast and full of ideas as any of the current (at the time) boppers and yet he could just as easily drop right back into swing mode, sometimes with in the same song as shown in the outstanding opening track.
Given the crew it sticks closer to the swing feel than anything but he still manages to slip in a bit of of samba, another nod to the then current vogue.


This is a solid lp that covers a lot of territory. Once again i apologize for the small imperfections through out. This is taken from the originally released lp and not a reissue.

Thanks for these. The two Coleman Hawkins albums are a great example of his tremendous talent. It's a shame that this great music is not appreciated more in the country of it's birth, the U.S.

Great to hear some rare Hawkins -- and Ernie Royal is a great bonus. Many thanks!