Yusef Lateef - Jazz "Round The World 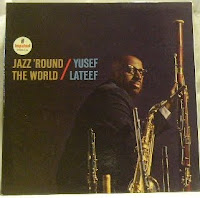 First off let me ask, is there anything cooler than holding these old heavy duty jazz lps with the great gatefold covers? Impulse especially. I just love that fat orange stripe in the middle of the lps collection. This is taken from the lp, as I try to do as often as possible.

As it might suggest, this lp tended to roam all over the place. long before world music was a popular term, many jazz musicians were exploring music from many different locales.

Lateef has mostly based these tunes on folk songs from various places around the globe and at least one will be instantly recognizable to all but a cave dweller.

This was Lateef's first outing for Impulse and his more far out stuff would come later, although this must have sounded fairly uncompromising back in its day.

The unfortunate thing is no song even clocks in at over 5 minutes, so their is little stretching out, something this very short lp would have benefited from immensely. Even so, I find that the 30 minutes I spend with this lp is always gratifying. I hope you do as well.

Yusef Lateef
Jazz 'Round The World

again with the mono...

Posted by Hookfinger at 2:00 PM

hook, thank you, I don't believe I've heard this one before...
will give it a go!
peace, E-mile

thanks a lot for these rare YL posts!! Wonderful blog.

YUSEF LATEEF - JAZZ 'ROUND THE WORLD

Many thanks for this one! Only two of Lateef's Impulse albums were never reissued on CD. The other one appeared on another blog some time ago, and now this one fills the last hole!

A stereo copy would have been nice of course, but, as they say, mono sound is better than no sound...

Seems this has been out of circulation for awhile. Per a request... new link...