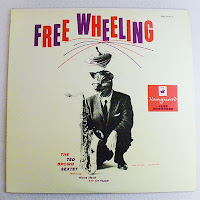 This classic has been long OOP, seeing occasional reissues over the years often times incorrectly credited to its most famous member, Art Pepper. Indeed it was Peppers presence that first caused me to seek out this fantastic record.
I only know of one other outing with Ted Brown as a leader. Shortly after recording this record, he headed back east to NYC, where seems to have worked intermittently in relative obscurity. Such a shame.

Not to be overlooked is the inclusion of another of my favorite saxes, Warne Marsh.

As is sometimes the case here at Hooks Gems, there is a back story to this lp. When I first moved to this area about 7 years ago, I really knew no one. I had no friends and sole mode of transportation was still a cargo van decked out for my business. At some point I found myself either watching or bidding on item on ebay with someone in my area. Im a little fuzzy on this part, but I seem to remember that you could see where the bids were coming from and even contact the ebay user. I may be way off base but anyway, I emailed this dude, out of the blue, introduced myself as another jazz fan, and asked if he would like to chat jazz sometime. He was very nice and we did indeed chat jazz. A very knowledgeable fellow but as it turned out a good 25 yrs older than me. The fellow invited me to his place for appetizers and wine one night, so I went and met him and his lovely wife. As we retired to the basement, he had a simple but astounding stereo and a jazz collection that surpassed anything I had ever seen. I asked if he listened to anything but jazz and he said "very little".
Still confident, I handed him my copy of this Ted Brown record in hopes I was bringing something he was unfamiliar with. He smiled with delight at the sight of the record, as he showed it to his wife. Apparently Ted Brown had played at their wedding. I never really pressed him on this and we spent a few fun evenings listening to jazz, with him turning me on to many a rare lp.
His name was Joe Hunt.

Sorry for the rambling. Here is a great jazz lp, from the vinyl source.

Thanks for sharing this. I think this is the same Ted Brown who appears with Warne Marsh in the mid 50s, with Konitz on Dig-it and Figure & Spirit, and has two Criss Cross records out (In Good Company; Free Spirit) and at least one Steeplechase record (Preservation).

Not heard this one, though, so looking forward to listening to the guy early on.

...'ramble ahead as far as I'm concerned'...
if the outcome is as splendid as this beauty !
'It's been freewheeling on my system', since its recent arrival... 'thanks' again!

Ted Brown Sxt...thank you very much indeed! Been on the lookout for this part of this particular Ronnie Ball session. Cheers!

Thanks for the comments everyone...Slim, that was indeed the great drummer. What wonderful human being he was - or is, i believe he lives in Boston now.

What a nice post - and I don't just mean the LP!. Many Thanks.

Was drooling when I saw this, lives up to it - great music!

wow, thank you so much for this. i put together a copy of this from individually downloaded files from napster in the late 90s. it's at 128 and sounds bad. this makes my day!

Thank you for this fine recording. Haven't seen it around before so very welcome. Nice blog

The link is gone. Can you please repost??

Sorry Alex...someone has the copyrights to this lp. i didn't realize that. i hope you liked the back story and i hope you go out and buy a copy of this lp. You won't be sorry.

Fantastic stuff. Why is Warne Marsh is so underrated? Anthony Braxton cites him as huge influence.

The link is broken. Is there any chance of repair?

As I mentioned before, this was pulled by the powers that be. Seems it is readily available on disc so I cannot re-up at this time.