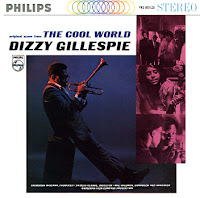 I have a soft spot for this period of Dizzy's work and this is no exception. Dizzy seemed to hit a surprisingly productive stretch in the mid 60's. This is one is somewhat odd. The soundtrack for Shirley Clarke's 1964 film, all of the tunes were written by Mal Waldron, though he does not appear on the lp.

I have never run across the movie but I would sure like to at some point, just to see how the whole thing fits together. Otherwise this soundtrack stands quite well by itself.

I don't think it is terribly hard to track down so what I offer here is the mono version burned from my lp.