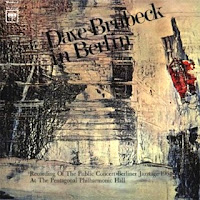 i've never been a huge brubeck fan, but your friend's generosity is admirable regardless. please pass the thanks along to him for being nice enough to share something he treasures!

freebones - ain't that the truth my friend!! The treasures far outclass the trolls. Will pass along your best wishes.

This is a rare gem! My thanks to all. The tunes were part of the quartet's standard rep in 1964, but the performances are quite distinctive.

Thanks so much for this one!

Thanks to both of you for Brubeck in Berlin!

Brubeck is always a favorite. Being a sax player myself, I credit Paul Desmond (and others in my parent's record collection) for showing me what tone and style are all about. I was lucky enough to work for the company that published Dave's music and met him many times; what a gem of a guy. Thank you for this. And everything.

i have an origional copy in great condition, i love it..