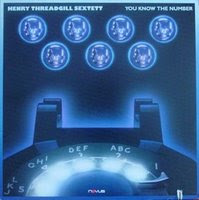 Some post review thoughts -
a.) Obviously Rab was more familiar with my taste than even I was, as this record quickly became a favorite and took several weeks to review for fear of overly gushing on about it.
b.) While research has shown this is often cited as Threadgill's most accessible lp, I intend to delve further into the man's
Posted by Hookfinger at 12:08 AM

Thanks for adding me to your bloglist, I did the same with your blog. Some really nice albums you have here, I even know some of them to my own surprise - good luck! :)

I have had "I Know The Number" since it came out on vinyl many years ago. It's a great recording. You won't be sorry delving into Threadgill's back catologue. I don't think there's a 'bad' Henry Threadgill record out there. Thanks a lot for this post. It's a great one!

This is a great record, a pity it's so little known as all the Threadgill's RCA/Novus and music overall. I collected all the Threadgill's cds I colud find in the last 10 years. I'd reccomend you Air's 'Air Lore' and HT Sextett's 'Rag, Bush And All' as high points of an almost costantly great production

I am so looking forward to hearing this record.HT always has some very interestingline ups of musicians to my ears anyway.
I recognize your name from the blog "CIA" still pissed that it was closed down I learned alot from those guys.The only good thing is that my wallet will still have some $ left in it come Monday.
Thanks for sharing this record and letting me have a chance to hear it.