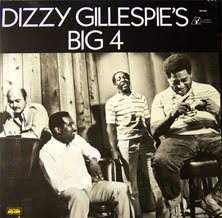 Hi, like you i've got rid of a lot of albums over the years - many of which, I wish now, I'd kept. Not everything is going to be re-released, is it?

I think this was one of them but I had a lot of those 'black and white' Pablos. Soon find out.

Anyway thanks for this and also for your witty commentaries which I enjoy reading.

This was the first LP I ever bought myself. It was in 1980, I think, and I was 12 years old. I still absolutely love every note on this album. Fine choice!