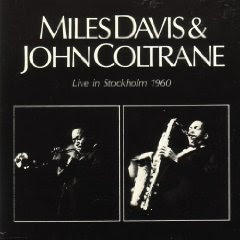 I had intended on getting this up Monday for Miles' birthday but pure laziness took over and I'm just now getting to it.
i guess partly because as i was listening to it, it ocuured to me, as it does everytime I listen, that maybe this should have the headliners reversed. Not that Miles playing isn't incredible because it is but Trane's playing was just about starting to his real creative peak.
This is the point where Trane had already announced that he would departing the quartet and striking out on his own full time, having already recorded Giant Steps. I sure I read somewhere that Miles was getting increasingly upset at the length of Trane's solos.
These recordings were culled from two sets that night so "So What" is repeated twice. I'm not sure why as there surely must have been more material to choose from. If I recall there has been a multiple disc set released from this date so obviously there was additional material. Oddly enough is that one version - the later one, is clearly superior.
Anyway I never saw this lkp for many years after I bought and have never stumbled across a vinyl copy since so here ya go. Part one concludes with a on air interview with Trane at a Swedish radio station.

Recorded at Konserthuset, Stockholm on the evening of 3/22/60.
Interviewer is Carl Erik Lindgren who also made this private recording of the concert.
Posted by Hookfinger at 1:50 PM

Hey! How are You? I've been looking for this rare album whole day, but would you be so kind and share the password with me? donwafel@gmail.com