The Count Basie Trio - For The First Time 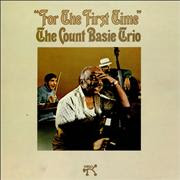 I also think sometimes these Pablo records get overloked as it is assumed that damn near everything from the '70s sucked. But ol' Norman actually coaxed out a handful of interesting, and even great, records from some leaders whose careers could have easily coasted from there on out.

But these guys wouldn't have been leaders if they given up so easily, would they?

This record definately shows there was more to Basie's playing than the stride handle that was hung on him. One of the most interesting things on this record is the two completely different treatments he gives to Gershwin's Lady Be Good. There are also quite surprisingly a pair of tunes performed as an organ trio.
So for something a little different here is Pablo 2310 712 once again from my vinyl.

thank you very much!
p.

Much love to you for your generosity and incredible collection!!!