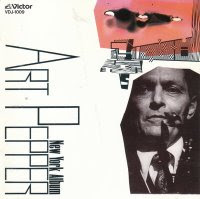 A posthumously released record with previously unreleased tracks from the recent Artist House record I posted. No slack here, Pepper laid down some great stuff at the end. If you are lucky enough to own the Complete Galaxy recordings, you already have this. Otherwise from vinyl...Galaxy 5154.
It would seem that these were from the NY sessions, but included is a stunning solo recording from the the LA session. Bastards tried to lead you down a false path, didn't they. Never trust a record company.