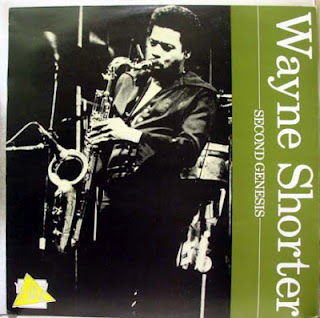 This is Shorter's 2nd lp is a leader. Originally released on the VeeJay label, this was recorded during his tenure with Art Blakey. Without a doubt, a formative record, often overlooked as he quickly gained fame in Blakey's Messengers and with Miles shortly hereafter.
Shorter's association with the Messengers is reflected in the straight ahead hard bop playing. Not quite up to par with those great solo BN's in his near future but a damn fine record no the less.
Oddly enough I own some odd Portuguese reissue, which I now share with you gentle souls and kind folk.

Posted by Hookfinger at 5:43 PM

Thanks HF - this will stretch me too - It'll do me good

Thanks HF - chancing my arm again.

Baron - I accidentally deleted your comment but you are the dude man. Keep hangin round.