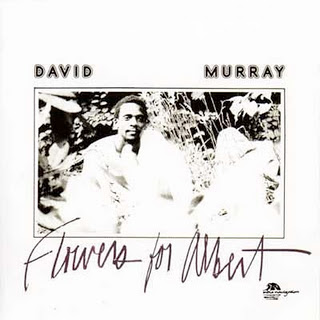 First let me say that while I was looking for a cover image, I found that one of my favorite blogs had already posted this lp. I do believe that they have a copy of the CD with the "Complete Concert" up though. Which in actuality is taken from two different sessions.
This is the original lp as presented except that  I cut the tracks at the obvious spot even if the lp lists them as a single track per side.
Goddamn! Murray was 21 when this lp was recorded. It was his first as a leader and was a fixture in the loft scene. I was 18 and drinking beer and smoking weed in a 100 dollar a month apartment listening to Yes and Pink Floyd on some crappy little stereo. So to say this music is so far past the scope of what I would have listened to at that time that it is crazy is an understatement. Hell 35 years later, I still struggle with it at times, even though Murray has become one of my favorite performers.
Flowers For Albert
1. Joanne's Green Satin Dress
2. Ballad For A Decomposed Beauty
3. Flowers For Albert
4. Roscoe
David Murray - tenor sax
Phillip Wilson - drums
Olu Dara - trumpet
Fred Hopkins - bass
Recorded at The Ladies' Fort, NYC 6/26/76
India Navigation IN1026

Posted by Hookfinger at 5:39 PM

Many thanks for this. Can't wait to listen to it.

Olu Dara (who plays trumpet) is none other than rapper Nas's father.