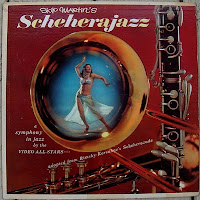 OK - so I never promised this thing would only be high art, and if we poll the critics among you, I doubt this would qualify as the first exception. Although it may be the most obvious example...yet.

This is only of those completely geek lps that contain as much info on the back cover about the recording process as it does the musician's involved. Except of course, the now completely unknown arranger who was, nominally I would bet, in charge of the session.
In this case we have Skip Martin, saxophonist with stints in the bands of Glenn Miller, Benny Goodman, and Charlie Barnett. Add a few Basie arrangements and this guy should be a household name. Instead we are informed that at the time he was a bachelor, sharing his apartment with a dog, flies his own planes and collects dames, Aston-Martins and empty bottles. Dudes like him had no use for match.com!

Before I get into the personnel on the session, let's touch base on the all important recording details.

"This is the first in a series of classical works for symphony orchestra and jazz band to be released on Stereo-Fidelity records." Yup - that's what it says. And just so know they are serious, the label informs us "This stereophonic 33 1/3 R.P.M long playing record has been mastered employing the Westrex cutter head system driven by a Scully lathe." There's more but they do not claim full fidelity when played on a monaural phonograph, in case you were contemplating such foolishness.

About the musicians - all were West Coast session men - some far more recognizable than others. I can't imagine this originating anywhere else. Many of these fellows found work in the burgeoning Hollywood scene. Now lest you think these fellows did this just for the cash, let me leave you with this last blurb...
Scheherajazz is just not another recording - it is a jazz project that by it's very dimension and unique nature immediately fired the enthusiasm of all concerned with producing it.

Despite all the hyperbole, this is actually quite fun, in a lazy afternoon sorta way, even though it was very late at night when I put this together. Pshaw - high art, indeed!!

this was fun to read. haha.

I have this on (beat up) vinyl. I actually like it!

Well - check back soon Bill, because a friend has cleaned it up fairly well, and I will post the clean copy soon. Probably over the weekend.

Skip Martin was a superb arranger with a great sense of humor. He did another LP in this vein, kind of a goof on Third Stream. Ellington did better classical adaprations, of course. Skip used the cream of Hollywood session cats, & whether here, or with Video All Stars, or his two "Perspectives In Percussion" LPs, they sound like they're having a great time playing his charts.

This album cheered me up immensely when I was stuck in a small Georgia town in the early 80s. I'd drive a couple of hours to see it performed.

Looks like a great bunch of LA's best. The concept reminds me of Billy May's "Sorta Dixie" album. I have been collecting everything by Don Fagerquist for a friend of my dad's who knew him, and this session is new to me. If you have the time or inclination to re-post, please do. I appreciate just hearing about this!