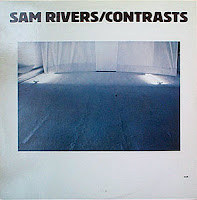 I realize this makes an occasional appearance out there in blogland but it's been awhile since I have seen it. And for some reason I never grabbed it, so I was beside myself when my friend Six String sent me a copy. A giant thanks to him for ripping this.

For many many years I avoided ecm because of their reputation for, well, what I considered "pastoral landscapes". I may have been a bit harsh and ecm seems to have found a warm corner in my heart.

This lp definately sounds like an ecm record, and yet it var more brazen than most. I seem to be among a fair group that is mystified at the non cd release of this incredible set.

Seven original Rivers' tunes, all single word titles that typify the recordings themselves. The trombone and bass weave in and about Rivers' almost slinky lines. A fantastic record.

Just to let you know that I've started a blog. I got a lot from from all the great jazz logs - yours being one fof them - it's now my turn to share.

Hook, I realized I've downloaded from you quite a bit in the last couple weeks and never even said' thank you'. Well, thank you a lot, both for the music and the commentary!

Thank you, Marco. I'm glad you stopped by.

Boogieman - good luck - I'll keep an eye on ya!

Jut wanted to say thanks for continuing my jazz education...