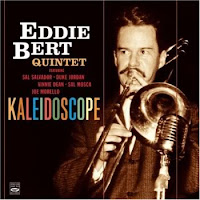 C'mon now. Admit it, Eddie Bert looks so freaking cool on this cover. Far hipper than Kai Winding, the other white dude playing trombone with any recognition at the time. Just dig that mustache. That mustache alone is worth the price of admission.

I love this Savoy session for a ton of reasons. First off, Savoy had a grittier sound than the more popular BN releases. And they tended to showcase lesser appreciated artists of their time. Eddie Bert was kinda second string trombone at the time. Eddie was probably aware of that. It didn't stop him from making some fine music. He appears on many fine recordings as a sideman. Yet when he takes center stage here, he really allows this to be a group effort. I never get the feeling he needs to be the star even though he is the de facto leader on these dates.

If I was hard pressed, I would say the most overlooked player on the dates is Duke Jordan. His piano is an integral part of the bebop revolution and he shines here.
And while I would normally frown upon a vocal track as a novelty, Bert doesn't embarrass himself on the single outing included here.

Look for Joe Morello of Brubeck Quartet fame on the last session.

Thanks for the Bert ... Baron

Thank you very much

Great fun! And great playing from all involved, especially in that sort of harmonic Moebius strip which is About Town.

Thank you as usual.

Hard to find guy, that's for sure. Being from a family of trombone players (mother and aunt, if you can believe that), I would sure love to hear this sometime. Thanks for thinking of us out here in the ether waves!