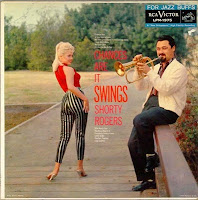 Shorty Rogers records often took, and maybe still do take some heat from the "serious" jazz critics. Me? I've always dug him. He stood by his conviction to continue in the swinging big band traditional long after it had fallen out of favor. His arrangements always feel fun.
Let's be honest here, just how serious do you think Rogers took himself? Lps about martians and outer space!! The dude definitely had a sense of humor about it. I think that's is why the lps feel the way they do.
On this session all the songs were written, or co-written by a single composer, Robert Allen. For me Allen's claim to fame will always be the Christmas tune "Home For The Holidays". The performers themselves are only credited as the "Orchestra featuring the Giants." The solos are all shorty and punchy in keeping with the feel of the whole lp which is rather short itself. - In retrospect the lp is not all that short but it seems to fly by far too quickly - hook
Released on the Living Stereo imprint, I'm betting this lp was the tits (which is way better than the cat's meow) when it was first released. It's always been my pleasure to do my part to keep this stuff alive!


The personnel of the orchestra cannot be found anywhere on the sleeve, so it seems worth while to list it here. Shorty Rogers was directing Al Porcirio, Pete Candoli, Conte Candoli, Ray Triscari and Ollie Mitchell (trumpets); Harry Betts, Dick Nash, Kenny Shroyer and Bob Enevoldsen (trombones); Bill Holman, Bud Shank, Richie Kamuca, Chuck Gentry and Paul Horn (reeds); Pete Jolly (piano), Mel Lewis (drums) and Red Norvo or Gene Estes (vibes). Don Fagerquist (trumpet) and either Barney Kessel or Howard Roberts (guitar) are featured in a small group ("The Giants") which is heard on some tracks.
Personnel info was taken from a Gramaphone article.

My lp has the Living Stereo bar across the top AND the blue" for jazz fans" box in the corner. Can't find a picture with both, and even sharing that with you means I am a geek.
Posted by Hookfinger at 2:42 AM

Thanks for this one, very nice. Afro Cuban Influence recorded the same year is one to put the critics firmly in their place!