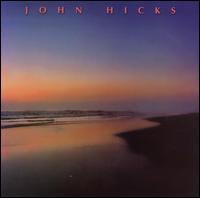 Every so often you end up with a recording that a friend gives you just because he thinks it is something you might like, not necessarily something you had been asking about. This record falls completely into this category. I assume the impetus was a shared admiration for Bobby Hutcherson coupled with a recent discussion about his work. What ever the reasoning, he was correct in his assessment of my taste. I like this little lp a lot.
I knew Hicks' name as he has been around awhile, floating in and out of The Jazz Messengers at times, but I was oblivious to any solo career which started rather late in his career. I knew he had done a Maybeck Recital session and a session with David Murray. Even though this is self titled, it appears to be his 4th lp as a leader.
While this session is not essential or life changing, we all have a lot of those very sessions laying about. This record relaxes me, untwisting the knots, smiling even, at some of the twists particularly from the leader. I'm glad it was passed along. I'm glad I have friends like that.

This friend has contributed several recordings and has offered more. Make sure to thank Six String in the comments.
Posted by Hookfinger at 2:21 AM

Love Hicks' style. Like Mulgrew Miller and Harold Mabern, I haven't heard a false note yet from any of them.

Best wishes and a very big thank you for all the great music that you have posted on your great blog.

Thank you very much Six String and Hookfinger, this is great music (as expected). However this music is extremely beautiful, the interplay Hicks-Hutcherson is perfect. Hicks playing in higher register, loking for an assembly with vibes. Delighful.

I like Hicks a lot and find him overlooked, but the same is even more true of Hutcherson. This will be a very intriguing listen. Thanks for the wonderful blog.

thank you Hook and Six String. John Hicks has been a favorite of mine since I am blown away by most of what Betty Carter did. I got to see them together a couple of times. AWESOME

Lovely, as elegant as anything John Hicks ever did, and he was a very elegant musician. I never even had got wind of this record! Thank you.

thank you for this beautiful post, more hicks please.

Well I am glad to see this went over so well. Six String replied that he was just happy to give back to the community. Thanks all for the comments.

Hola, New Years greetings from Espana. I wanted to thank you for your informative blog and the hard work you must put in. I don't leave as many comments as I should, buzzing around blog land and all over the web, but I want to take this opportunity to thank you.

I also wanted to inform you that I put to your blog on my blog watch 'Information Inspiration'. It's really a big personal blog roll, but I'm sure some music fans will find it useful; http://information-inspiration1.blogspot.com

Today I launched a new blog 'Rhythm And Groove' which you may want to check out when you have the time; http://rhythmandgroove.blogspot.com/

Well, just taking and never giving brings definitely a bad karma, and an even worse start for new year… so here it is this fine 1969 Prestige date by Charles McPherson (320 VBR).

Thank you very much Six String and Hookfinger

Thanks guys for this beautiful music.
I take this opportunity to make a bit of publicity for the blog I recently started, mostly OOP jazz albums (CDs for the time being but I hope to start ripping my Lps as soon as I have some free time).
You're all welcome and I'll be pleased to link with like-minded bloggers.
Cheers
Boogieman
http://theboogiemanwillgetya.blogspot.com/