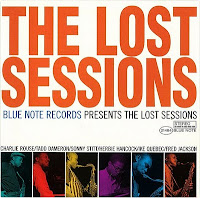 
I'm betting many of these tracks have ended up tacked to individual lps as bonus cuts. The "leader" of each date is in bold.
Posted by Hookfinger at 4:20 PM

No comments! Amazing,thanks a lot plenty of good sounds on this one

Many thanks! looking forward to this1n

Thank you so much for this!!! I had been wanting to hear the Tadd dameron session with Curtis Fuller for years - never could find it!! Thanks again so much!!!!!

Man, it's really cool to see you guys stopping by. My pleasure!

Confess to being primarily interested in the Tadd tracks here - thank you very much.

I'm surprised as well that the Rouse sessions didn't produce more releasable tracks. "One For Five" was released as a bonus track on "Bossa Nova Bacchanal" and it sounds great. I can't imagine the other tracks from this session not being of releasable quality as every one of the players on that session were top notch.

Thank you for the post. I have also been looking for this Tadd Dameron session. In fact I had to buy a 10-inch re-release for the Japanese market of "A Study In Dameronia" on Prestige w/ Clifford Brown last year because it was not in print (how is that even possible???). He is very under-appreciated imho. Thanks again.

This is the most absolutely FABULOUS SURPRISE EVER! What a way to spend the Fourth of July Sunday weekend late night! RVG (Rudy Van Gelder) was genius as much as the musicians as a sterling A&R man supreme. The Tadd tracks are 'magically modern' to say the least. I'm a Blue Note Collector for 30+ years and thought this was a gimmick. What kind of fool was I? :) No comments can do this justice. PLEASE REMEMBER to check your regular e-mail for the Donald Byrd/John Jenkins 'Star Eyes' on Savoy post upload request. THANKS A TRILLION!

I just got arrested!!!! (happily by the MUSIC). The Tadd Dameron tracks embolden another celestial/cosmic event among many I've had lately. I was just listening arbitrarily to Miles[Davis] Complete Live Sessions,1948-53 with Dameron, a heavy rain came, and then I stumbled into this one. I couldn't avoid sharing the reiteration that the Tadd Dameron is magnanimous as is all the music. VISCERAL!

In addition to my other comments, Dameron was CRIMINALLY ignored and under recorded. THANK THE GODS for these few TRUE GEMS!!!

More on Dameron: These FEW tunes are fully instructional to the advanced musician/listener in that Dameron's use of audible
chord substitutions in the writing AND the comping in-session produce a MARVELous display of originality and mastery as a composer/arranger and a player. His use of flatted fifths or what-have-you, and augmented and diminished forms provide humor with intellect, by design. As well they instruct that personal and purposeful Dameron voicing flavor in the ensembles sections of a given piece. THANKS AGAIN!

you are a good book walking