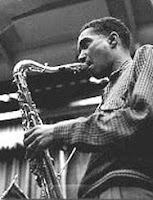 I really dig Wardell Gray. I love the way he embraces bebop and swing both and yet manages to be the precursor to that whole west coast sound.

Gray later became semi-famous for his battles with Dex but I think these sessions stand up as well as anything he did.

Most have been reissued in various forms but were originally released as Prestige 78's.

Everything here comes from a Prestige twofer released the year I graduated high school. I can't imagine how I missed it. Due to time constraints I have not included a couple of alternate takes.

Could you repost it, please!

Sorry Brian, I am having some serious issues with my cd burner. New one on the way =m I'll fix the tracks then.

Thanks, hook. Wardell is great but not so easy to find for some reason.

Any chance of a repost for Wardell Gray's Central Avenue?

Hell yeah, Gavin. Thanks for dropping by. A perfect opportunity to revisit a classic and fix it up. I'll get it up over the weekend.

BTW - do you have my email? I have some other non-postable stuff I think you would really dig.