Dexter Gordon Quartet - There Will Never Be Another You. 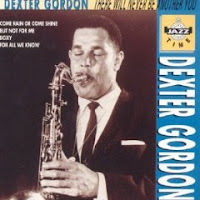 The back story - this recording is taken from a cassette that I have carried around for what seems an eternity. I hadn't played it years for fear of wearing it out, breaking it or something else stupid since I never ran across another copy.
I suspect I dubbed it from a disc which I checked out from the library when I was living outside of Chicago. The library system in that area was fantastic and my interest in jazz had been recently rekindled by some local djs. I was dubbing off as much stuff as I could while I had access to it in an attempt to learn more about what I did and didn't like in jazz. At the time Dexter did not click with me and so it went unlistened to for a very long time. I have since rectified that mistake and filled my life with many later period sessions by Gordon. I was ecstatic to find this in a box of cassettes set aside for conversion.

A little research shows me that these tracks were originally released by Black Lion as part of "Dexter Gordon - The Montmartre Collection" - a pair of lps.

There Will Never Be Another You

1. But Not For Me
2. There Will Never Be Another You
3. Come Rain Or Come Shine
4. Doxy
5. For All We Know
Dex - tenor
Kenny Drew - piano
Al Heath - drums
Niels Orsted Pederson - bass

I have also attached an orphan track that I have had laying about for years. I'm pretty sure I got it off a Smithsonian set at some point. It has never turned up on any of Gordon's early compilations that I have. Since I am not a huge fan of his early work, chances are this will be the only way I own this track. The songs is -

Thanks--I had these Black Lions years ago--where did they go, I don't know. Great to hear this again. The Black Lion Don Byas sessions were great, too. Wish I hadn't lost those as well.

Yup guys these montmatre sessions have appeared on many a compliation I've stumbled across..And very good they are..In fact these '67 live dates are some of the best live Dex from the 60's..Also the recording quality is very good unlike some steeplechase issues from gigs Dex did from around this period.