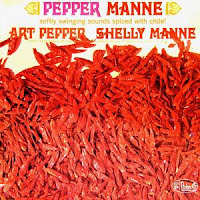 I've listened to these tracks pretty closely and I am fairly sure I don't have these versions of the Art Pepper tracks elsewhere.

I know I don't have the Shelly Manne tracks but I know very little of him. Assuming that those tracks are different that previous versions as I suspect the Pepper tracks are then you truly have a little gem here. The Art Pepper tracks would have been recorded during his mid 50s period.

I bit of research turned up this from dustygroove...

Excellent work by both players -- even if the source of the material's a bit sketchy! This set probably has less to do with the Charlie Parker imprint than most albums on that label -- and we suspect that the material was taped by Apex in LA, and later relased by Charlie Parker in a dodgy one-off deal. Who cares, though? Side one features some incredible work from Art Pepper -- playing here in a quartet with Russ Freeman on piano, and sounding incredibly sharp, with an edge that's missing from some of his bigger-known sides at the time. The group plays "Diane", "Pepper Pot", and "Besame Mucho", as well as a great version of "I Surrender Dear". Side two features Shelly Manne leading a very unusual group -- a sextet with piano by Robert Gil, and a heavily percussive lineup that includes extra drums, bongos, and conga. The sides have a strong Latin flavor, in keeping with the red peppers on the cover of the album.

In Glorious Mono
Posted by Hookfinger at 9:04 PM

Never seen this before. However I think, on comparison, that the Pepper tracks come from the Nov 23, 1956 session that was relesed as Tampa20 and reissued on CD by VSOP.
The Manne I've never heard before. Many thanks.

Some great playing, indeed. Given how short the recordings and the date, I wonder if these were originally intended for 10inch LPs, or even 10 inch 78rpm pressings.

I can't find the tracks in my extensive Pepper collection. I did think I was getting Pepper and Manne together in a band (the aim of the title, I suspect), but they are great to listen to. Pepper skips along with an astringency that wasn't going to come in most recordings until his Coltrane conversion; and Manne finds himself in quite a challenging rhythmic context and responds well.

Thanks for sharing these.

Something wrong with 05 and 06? 05 seems to be Move plus a little of something else and 06 Move again but without the extra rather than Sometimes I'm Happy. The Manne tracks appear to be from "Hot Skins". I did compare 01 with the Tampa album and can confirm it is the same - presumably the other Pepper tracks are too.

Yewsta - thanks for the heads up. The tracks should be corrected now.
I only have the VSOP/Tampa of the Marty Paich stuff, so thanks for that info as well.

Thank you! Great Post. I thought thiw might be from the Besame Mucho album, no?
Thanks Again, Axel

To tell the whole truth, I noticed it straight away but didn't want to say as promptly because it looks a bit like just carping. Even more honest, I suppose I thought someone else might smooth the way. However, most folks do not listen to the whole for quite a while I guess, the vast majority it seems from what I hear, whereas I love to be right on top of things and normally listen to whole albums at the latest the same day and usually within minutes.

Thanks for the correction - I will check it out!

Oh dear! Don't know how to tell you this. 06 is now the same as 07 (Fascination) and so still no Sometime I'm Happy. Haven't checked the other tunes.

Hey Hook, nice album, had for a good ten years and usually play the Manne more often than not, mostly due to the latin flavour you mention.

That side was also originally released on Tampa (TP-21) under Mike Pacheco's name as Bongo Session which had one other track not present here. Discogs gives recording year as 1955 and Dusty is likely right on the LA location since the original Tampa label says "recorded under the direction of Robert Scherman" who was a bigtime Disney employee. Him and his brother wrote the songs for Jungle Book, Mary Poppins, etc.

Alright yewsta! Now it has just become a comedy of errors. I have just reburned the Manne side of the lp and will attach it and repost the fixed (?) version in mere moments. Honestly, I would have to say that I cannot hear "Sometimes" in this version, but I have been known to be a cloth eared twat so there you go.

Thanks for you patience and thanks for all the comments...

For those of you following along..if this ain't right then I ain't getting it...newest link should be correct.

If at first you don't succeed...

Looked up yewster's tidbit on Hot Skins on VSOP. Seems Yanow got it slightly wrong as the Interlude release was a reissue as well, released in '59.

Thanks for your patience too hookfinger. It is what it is.

Always good to find another Pepper spirit, man! Thanks for the material I haven't seen around, before.