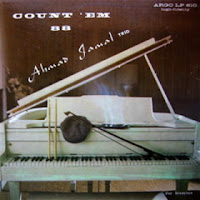 When I lived just outside of Chicago, I was lucky enough to stumble across an "antique store" a couple of towns over that had loads of lps in the basement, including an extensive jazz section. Careful mining only yielded a couple of real killers though. Just the same, Jamal was a local somewhat and all of his Argo/Cadet lps were in abundance and cheap as hell.

Despite the fact that Miles says I should love Jamal, more often than not he leaves me cold. I wish I would have seen him live when I had so many chances. That may have added more perspective to my opinion.

Despite that, Jamal put out a couple of records that stun me. Not just OK records but really really good ones. This is one of them.

Thanks for this--I lost my copy years ago--great record!

Hey Slim - you're more than welcome! thanks for all the great comments. See ya around!.

I'lll get this one when RS allows the pleasure. Until then, have you heard Jamal's The Essence Pt 1 and Big Byrd - The Essence Pt 2? They are both excellent and heavy on the rhythmic thing with Idris Muhammad supplying a strong backbeat throughout. Also his live one from Joe Segal's Jazz Showcase is very worthy (trio).

This is a hard one to find.

Thank you very much!

Had a couple of tracks sourced from the Limewire days, so really grateful to hear the whole thing. Many thanks...