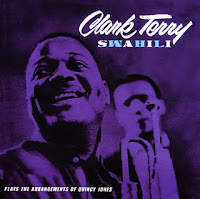 Clark Terry is often seen as one of the "elder statesmen" of the bop movement. I can't argue with that. His records "In Orbit" and "Serenade To A Bus Seat" are untouchable. Perfect examples of their craft. But outside of that I have found very little Terry that has captured my attention. And lets face it, his signature tune "Mumbles" is little more than a novelty number.

Now lest you think I am bashing Mr. Terry let me tell you that he has appeared on many, many records that I dig immensely. When I had a chance to see him several years ago, in what basically amounted to a large meeting room at a local hotel, I jumped at the chance, and kick myself to this day for not sticking around after the show to meet the man personally.

I found this record while digging through the basement of an "antique shop" in Geneva, Il. many years ago. The list of records I found there would make many drool with envy, but I digress.

At the time I was snapping up anything that even sounded remotely African influenced. And so I came to own this awesome lp. Nothing like anything I had heard from Terry before. Much earlier and full of fire, this record still finds its way to the turntable far more than the "classics".

Of course the outstanding cast of characters supporting him on this lp doesn't hurt one bit. This is terry's first outing as a leader.

Thanks for sharing this. I've always loved Clark Terry's playing. Got to see him a few years back. His playing was still pretty great.

Thank you for making this avaialable

Winneba - thanks for stopping by so much. hope you are having fun.