Sonny Stitt and the Giants 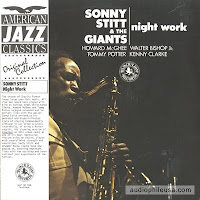 A really cool record for several reasons. First it is up to Stitt's usual high standards.

As you probably know the comparisons between Stitt and Bird were the main reason Stitt switched to the tenor as his main instrument. On this outing he switched back to the alto.

Which is the second reason this record shines. Stitt's choice to pick up the alto for this session are his cohorts, The Giants, all veterans of Parker's bands.

The first two tracks are outstanding blues work outs by the whole band. Loverman sees the band with just Stitt on a song made infamous by Bird.

Satin Doll is the rhythm section's chance to shine, while they join McGhee on Don't Blame Me.

The blues reassert themselves as the entire band closes out on a clever choice, Hello.

And a big thanks to rviti for locating this cover for me!!!
Posted by Hookfinger at 4:05 PM

Thanks for the info since my copy of the jacket is messed up..