Johnny Griffin - you leave me breathless 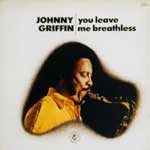 I seem to be on a bit of a Black Lion roll lately. Well maybe not from where you're standing but here around chez hook it's been relentless.
But, goddam, what a bunch of records! I grabbed them when I could and never found disappointment.

Here's another that completely rocks my little world.

Griffin was one of those guys that seems to leave the tune behind, working on chords and shit I don't even understand. Sure 'trane did the same thing but I seemed to have always been able to wrap my head around Trane. Perhaps it was because of the early exposure.

Negotiating chord changes - I have no idea what that means. I think Griffin rolled out some muscular versions of these songs and has kept my interest. I think these ex-patriots were having a blast relishing in the accolades showered on them in Europe at the time and the bonus has been these great recordings.

There are some fine romps here, but it is the 12 minute, subtlety menacing ballad "Old Folks" that has always captured my imagination.

Johnny Griffin
you leave me breathless

never heard of this one - huge thanks!

A somewhat larger image of the album jacket is available here:

I have this on LP and it is a very fine LP. I imagine rare at this point for I have not seen it anywhere. Thanks for this.