Hannibal - The Angels Of Atlanta 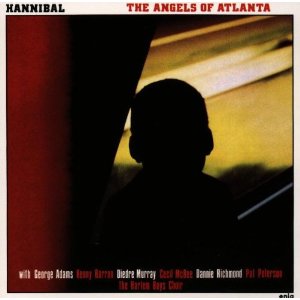 This is the lp I promised a couple of posts back. One of those I found in the local junk shop (Gotta call a spade a spade here). Never the less I was quite happy to land this, an original German enja release.

Peterson's trumpet soars while accompanied by a fine, fine bunch of musicians. The addition of the Harlem Boys Choir adds to the grandiose feeling that pervades this release. At first I was a little put off by the many vocals but as I kept listening I began to understand how perfectly they fit in. Duke used vocals several times in the same manner making the song sound big and intensely soulful at the same time as they did here with "The Inner Voice". Another nice touch was the use of both cello and standard bass.

This is a record that I knew absolutely nothing about, had only a rudimentary knowledge of Peterson himself, but when I saw the band I know I should be listening to this record. My blind choice did not disappoint, and indeed while I was trying to whittle the guy down on the cost of several other records, I knew this would be worth every penny that he undervalued it...$5.00.


1. The Angels of Atlanta
2. The Story Teller
3. The Inner Voice
4. Mother's Land
5. Sometimes I Feel Like A Motherless Child

Posted by Hookfinger at 2:21 AM

nice one hook! I've heard this one before, for mere 5 bucks this is a bargain [:-)

I usually listen with my heart. there is more to music than just listening with your ears.

I'm very excited about this one, thanks,
Wayne