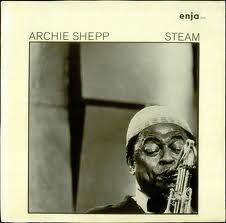 As one of those dudes who scours around for records anywhere they may be lurking, it is finds like this that keep reminding me of why I do it. the other day I buzzed past a small "antique" shop that I see often but is rarely open. I have sifted through their decent pile of lps a couple of times to no avail and never saw anything that would have indicated any change in inventory, so I am not sure why I bothered to stop again. Just perhaps because it had been so long, or just karma, but stop I did. The owner did not recognize me and explained the records were a dollar apiece. And just like the last time I asked if he had anything that was "collectable". He directed me to a couple of cabinets that I had seen previously but this time he added a third. It was filled with the usual Beatles and crap that people think are worth something but lo and behold I found this lp. Actually I also found the next lp that I am gonna post as well, also on Enja.

This is Shepp at my favorite. Live. Stripped down, raspy and raw. I just love the way these guys tear into one of my favorite Duke pieces. I don't have any idea who these back up guys are but they're alright in my book. The only other two pieces on the lp are a smoking Shepp composition that lives up to it's name, and  piece written in appreciation of John C. Shepp handles it beautifully.

This was recorded at the East-West festival In Nuremberg, May 14th, 1976 ( was a senior in high school, and had just barely discovered Miles and Trane. Man, did I have a long way to go.)

Posted by Hookfinger at 7:32 PM

mr. shepp is in excellent company here on this classic, Hookfinger!
I consider this a classic (also)
Might be worth your while to check out other Beaver Harris (360 degrees)
albums as well [:-) Fantastic music.
And a fantastic bargain for just a dollar as well! Congrats on your new header btw, makes me, well, I guess "all vinylly from within" I guess[;-)
peace, E-mile

This is a great album. Shepp is one of the greats. A dollar? You really scored!!!
keep up the great work!
TN