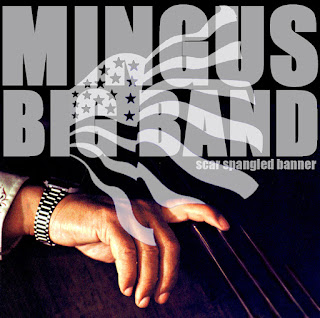 I may be slow but this is a classic story... A while back I posted a Mingus Big Band radio show from Glasgow, which incidentally was from a friend in IAJRC. Well, our buddy JD said he had a recording of their return to Glasgow that he wanted to share. I enthusiastically agreed. and then both of us promptly forgot.

Fast forward one year and JC lets me know it wasn't really Glasgow but NYC and did I still want to share?
Well of course. It is also the reason I love doing this. Because there are a handful of music lovers that really care about this stuff. The troll may get me down but this makes it all worthwhile. Thanks JD, for the awesome contribution.. Now I'm gonna let the dude speak for himself ...

The band move through a kaleidoscope of styles with a swinging ferocity that Mingus would have frankly envied. All his life, he craved and rarely had a large ensemble to serve his oversized compositional ambitions. “Charles wanted a band like this desperately,” says pianist and arranger Sy Johnson. “And on a night when the gods are smiling, it is an awesome thing.”
Ms. Sue Mingus, figurehead behind the continuation of the Mingus legacy,  may not have quite her husband’s appetite for public confrontation, but she has mastered the first principle of his working method: demanding from the band the highest level of im perfection. As Mr. Johnson recalls: “Charles had a chaos theory long before the scientists. He would get infuriated if the band really started to swing hard. He felt that the band was being taken away from him. He would get mad and try to fuck it up. He wanted to mix it up, make it uncomfortable for the players so they would reach deeper into themselves.”

Without the benefit of Charles Mingus to trip them up, the Big Band finds its proper level of chaos by having no one specifically in charge of the music. Sue Mingus draws on a pool of maybe 100 first-rate players that on a given night might include trumpeter Randy Brecker, saxophonist John Stubblefield, pianist Kenny Drew Jr. Instead of a lineup, there are fractal patterns of personnel that assume a specific personality for one gig  and then disappear. The constants are a lot of good soloists competing for solo space, the arrangements and Mingus’ own tunes. It adds up to a coherence rare in a big-band world where brass sections still play call-and-response with the reeds. Another way of looking at it is that it all adds up to Mingus.

“He’s dead center in the middle of the music,” Ms. Mingus says. “I think all the musicians feel that way. Sometimes there are specific moments when the bass string will snap at the beginning of a concert, and everyone gets a funny look on their face. He’s still egging people, making these demands. I feel like a mouthpiece for him-I’m the loudmouth in the wings.” Adapted from a web article on the Mingus Big Band at the Fez
This is a set I've been meaning to post for ages, but I simply never got round to finishing the artwork until now. Never mind, it's here now, and it's a real KILLER from start to finish! The Mingus Big Band is, for me, one of the best BBs around; always reliably solid, always enjoyable, but when they're at their best - as here - they're unbeatable. The short recording, some 43 minutes and comprising just four top-notch compositions, comes from early in the band's residency at the Fez in New York in 1998, and was aired by the BBC in (I think) 1999. I've treasured it ever since. Clearly, as Sy Johnson says, the gods were smiling this night, and it is indeed an awesome thing!....JD

Posted by Hookfinger at 8:10 PM

Everybody oughtta throw a big shout out to JD for this great post....

This is really a beautifully recorded set! and JD always has the best graphics! Thanks!

Thanks, JD, and thanks, Hook!

As you say, an impressive example of the Legacy band. Thanks!!

Thanks for posting this ! I saw the band play a couple of times at The Fez around this time and it was indeed incredible. My gratitude to both JD and Hookfinger. All the very best guys.

Thnx JD. You too, Hook. Mingus Big Band a great way to carry on Mingus's tradition.

Thanks a lot guys for this gem

I am in awe of this band.

Thank you so much for sharing this!!