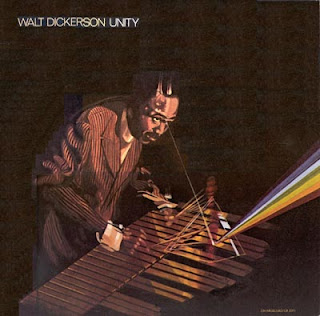 I've had a couple of requests to repost this record. So here tis.

The vibes are cool, man. That's all they can be.They can swing. Oh, they can swing like a mother, but they always stay cool. Lionel Hampton was cool. Lionel Hampton was cool. Really cool. Bobby Hutcherson was cool. Probably the coolest of them all.  But in between Dickerson showed 'em how to improvise.
These side long tracks sport a pair of drummers and not a horn to be seen!! I freaking love these kinds of lps. Not your standard line up but somehow that's OK. This stuff surely has influenced some of my favorite modern lps.
Grab a cool whiskey and watch the sun go down on these last days of summer. This could be your soundtrack.

The cover photo is of the 1978 vinyl reissue you are currently digging...or at least should be soon.

Posted by Hookfinger at 7:36 PM

I have several of his albums in my library, but not this one.
Looking forward to listen it.
Thanks for the share Hook.

hookfinger, I wish you & yours a messy X-mass and a healty & happy 2021! may the music be with you and remember: take care out there!
peace, E-mile

Like Uri, I have several WD albums but I haven't heard this one. THANKS!

Happy new year to you !!

Wow, been looking for this, but the link is dead. Regardless, Captain Hook, you are a gem!

well Dirk Bill, if you still visit and others who have requested, here is the new link

One of Dickerson's I haven't heard before. looking forward to the pleasure and many thanks for the share!

Yes, even though I did something stupid like get a job, I still visit when I can screw my head on straight! Was just playing some vibes recently so there must be something in the water. Very very much appreciated, Sir Gems! I am catching up for lost time and this record has vaulted to #1. Thank you profusely for posting this.