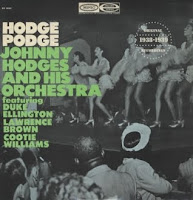 Recently a discussion about "swing era" bands came up with a few friends. The usual was bandied about. But surprisingly when Duke was mentioned, most folk almost always referred to the the Blanton/Webster phase.
I spent a couple of days wrestling with whether or not Duke was a swing band and how I was going to explain my position. A listen to Cottontail chased those thoughts straight from my head.

It's simply crazy how much Duke recorded back in the day. Even crazier is how there was enough time for his compatriots to record all this stuff under their own names.

However they worked it out, we are all richer because of it.
Nary a famous orchestra song among the bunch. Awesome...but I bet you could track these songs down elsewhere easily enough.

Johnny Hodges and his Orchestra
Hodge-Podge

Many thanks for the opportunity to hear Harry Carney, also!

Thanks for this classic Hodges.

Many thanks for posting this gem

True gems indeed and thanks ~ ☮ldhippierick

new site for "Jazz and Blues All Day"
http://oldhippierick.wordpress.com/

This is a wonderful lp. And it's of course a swing band, especially the Blanton-Webster aggregation.

By the way, except for the last tune on this very lp, Mr. Billy Taylor is heard on bass.

Question: do you have the exact recording dates? They aren't listed on the lp.

Hook, I ripped this in FLAC before I realized you had it, but if you want my files, I can upload them.

@Otis - I would love that my friend. I still struggle with uploading flac. Someday someone will show what I need to do...till then we have our heroes.