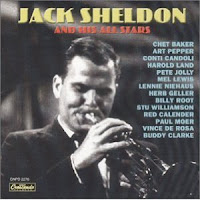 Shit photo, I know. Sorry. (Actually thanks to Old Hippie Rick for supplying a better cover. The shit one is reproduced below.) Great record. And one I don't see around much.
Serious West Coast cool in a large band format. There is a small window of time when these dudes were awesome at this.

Sheldon was a veteran of the scene and assembled a crack crew for these sessions.

Recorded at two different sessions, I have no idea why the latter date is presented first.

Thanks for JSheldon ... always time for his playing ... only had time for first track - Green Dolphin Street ... very good.

Always loved him with Curtis Counce's band--just learned that he was one of Prez's favorites, and that's the highest endorsement right there.