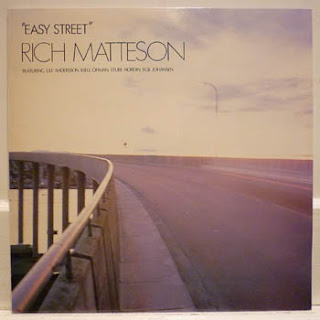 I had this lp cued up to be reviewed and submitted almost a year ago but then I decided I didn't like it all that much, mainly because of the Billy Joel cover so away it went. It did tend to creep out occasionally but usually got shuffled back without much fanfare. At one point, it was in my hand to be filed into the shelves but I thought to myself "I remember why I bought this record, and if I stuff it in here chances are it will not see the light of day for sometime."
You see, I was in a little record store in Green Bay on a visit when the fellow threw this on the turntable. As it played it caught my interest and I asked who it was. The fellow handed me the jacket but I said I didn't recognize the artist. He shrugged his shoulders and told me he didn't either, he was just going through some records he had just bought. I was intrigued enough that I offered him a couple of bucks, if he would sell it to me on the spot without digging through some book.
I'm assuming the other 50 bucks worth of records in the pile swayed him because he agreed. I had to wait a couple of weeks to actually hear it again because he was on his honor to box up my find and mail it to me. He did...faith in humankind restored.
Now about the lp...we have a scandanavian quartet backing an american scholar playing the euphonium. What the hell is a euphonium, you say? It's like some crazy cross between a small tuba and an overripe french horn but twisted up like trumpet. Got it?
Matteson, at the time of this recording was on board faculty at North Texas State University, heralded for their fine jazz program. He passed away in 1993. This record was recorded in Sweden when he was there for a festival.
Oh and the scandanavians...they're slouches either.
To this day, I skip the Billy Joel song.

A bit later than I had thought but the link....

Thanks a lot - this looks nice, like a lot of your fine, generous blog.

Thanks, and always nice to see a new face round here, so to speak. Hope you find some more that you like.