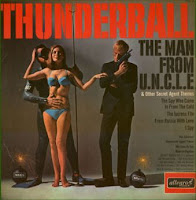 Enjoyed this one too HG ... details of this session have so far proved elusive ... the US issue was Design 206 ... Baron

Thank you for this, very enjoyable!

Sheila Jordan was on the faculty at my college and one of her first records in the 1960s was with pianist Johnny Knapp and bassist Steve Swallow.

The fine alto player who doubles on flute is Larry Charles, a young Kenton alumnus at the time. Sy Salzberg, unless there's another musician named Sy Saltzberg, is the drummer on the date. I'm not sure who Bobby Crowe is but since we've already got a rhythm section, he might be the harpsichordist.

Obviously this is not "Jazz Suite for Brass," J.J. Johnson's contribution to Outstanding Jazz Compositions of the 20th Century. It's a commercial recording date of the kind we've all had to do in order to eat, pay the gas bill, etc.

Wow! This is absolutely the kind of "jazz" I dig during a cocktail party. I will go out of my way for albums like these. So, with all due reverence, could you re-up at your earliest? I would appreciate that very much. Thanks again for all the great music.