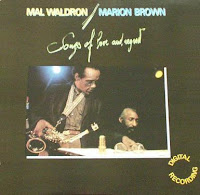 Sometimes your hands shake when you stumble across a recording that you have been searching for. And sometimes you stumble across one, and think "this looks cool, I wonder why I never heard of it."
I had the second reaction when I should have had the first. Why some fool dumped this off is beyond me. Praise be to the fool behind the counter that sold it to me for 8 bucks because it was still in an unsorted pile and he didn't feel like dicking around.

As is understood I am a huge Waldron fan and though I haven't posted any Marion Brown I love him as well. I had meant to post this shortly after Marion's passing but it slipped my mind.
This set is mostly covers , although a couple are pretty obscure. "A cause.." is a Waldron original as is "To the Golden Lady" by Brown. "Contemplation" is by Tyner and "Hurry Sundown" by Clarence Williams. The others should not need an introduction. The one remark I will say is Blue Monk (take 2) doesn't feel like an alternate take but mostly just a different take that was always headed for this session.

This has recently become one of my favorite recordings. The lyricism these two share shines on this lp.