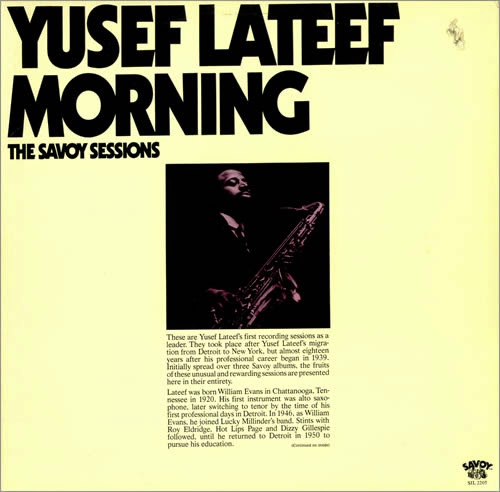 Always nice to repost something that someone requested that I probably haven't listened to since I first posted it over 4 years ago. This is great stuff. Not a bad track across both lps.
These are Lateef''s first sessions as a leader after his move from Detroit to NYC. Originally  released across 3 Savoy lps from just two sessions a few days apart.
These sessions were recorded a year before I was thrust upon the world. These reissues were  released in 76, my senor year in high school. Only a year had passed since I had realized the fantastic sounds of Miles and Trane. This shit wasn't even on my radar. Tis a shame.

This Ysef Lateef album sure brings back a lot of memories. Very good album. Thank you very much.

Thanks, I had this double LP for 30 years, it's one of my all-time favorite Lateef albums. Not a bad track on the two LPs.
Cheers

Thanks a lot. Necer got these sessions complete

any chance for re-up? Would love to hear this one.....there's a cd box of these albums out in europe on fresh sounds, but this lp appears in the used bins sometimes. THought it might be worth picking up. Really love 'Cry Tender', it's well worth checking out.

Thanks a lot dave!

I'm not not familiar with this recording. Looking forward to hear it.

Thanks Uri! You are more than generous yourself.

Hi best sounding blog on the internet :). My question is what is your entire setup for recording , which turntable , needle , phono etc , i need your set up , awesome sound :) , keep this awesome blog alive please

Nice thanks for this!

Wow, thanks!! Just for the record, if anyone's interested, here
are the personnel of the 3 Savoys put together in this album:

JD - thanks send to hookfinger@yahoo.com. I never come here any more so I hope this works out.