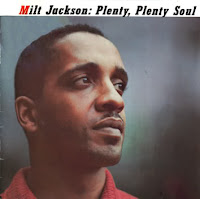 I think this lp is actually seeing a new release soon on one of those discs that contain 4 lps. A bargain, yes. A bad idea throwing all that stuff to together, hell yes! I think it is even being thrown on with Telefunken Blues, which was originally released under Kenny Clarke's name but didn't garner enough attention that way so was remarketed under Jackson's name.

Ok so record company rant over, here is my vinyl copy for you to enjoy!

So my first exposure to Milt Jackson was in the mid/late 70's. We used to get colossally baked and sit in the attic and listen to Sunflower and Olinga along with lots of other CTI jazz, George Benson, Deodato, Airto, Freddie Hubbard....

Hmmm, I wish I had known this date back then...

Somebody should mention that Ronnie Peters is really Cannonball Adderley. He must have had an exclusive recording contract with some other record company at the time and was allowed to use his "real" name.

It would be fun to compile such a list :-)

I know that he and his brother Nat had used "Pat & Jud Brotherly" at some session.

well there you go, my friend. I did not know that. Thank you for the heads up!

And he was altoist "Buckshot LeFonque" on a Louis Smith Blue Note album. Great record, btw--good old butt-shakin' music with be-bop kneaded into the dough.

Oh yeah if I am mentioning sax men to not notice Foster in his pre-exile prime that was an over site.Most of the orignal Jazz Messengers,Jimmy Cleveland etc.What a line up!

Should have called it "TONS OF SOUL" ! Thank you Hookfinger...

Big!!!
Thank you my friend.

Thanx, Hook, for the two Plenties and one Soul. Flat5's revelation that Ronnie Peters and Cannonball Adderley shared the same body was intriguing.

Plenty, Plenty Soul was the first modern jazz LP I ever bought (in that jazz hotbed of Cirencester, Glos!). Even after 50 years this LP, for my money, is beyond compare. After various moves around the UK most of my LPs have gone awol so imagine my delight when I bought this Milt Jackson 4xLP - CD recently. I had always assumed that the alto sax player was Cannonball and when I read that the alto player was 'Ronnie Peters' I was amazed. I consequently did an urgent google to find out exactly who this 'better than Cannonball' guy was; where's the discograhy ?! So thanks for for putting me straight as to the 'true' identity. I can now relax and appreciate this absolute gem of an 'LP'. Didn't rate the other 3 though; fairly run of the mill but 'Plenty,Plenty Soul has arrangements that make the group sound like a Grade A big band,and Buhaina swings like crazy as usual. Good to read comments of like minds too, regards, Goughie

Let's see, Goughie, you bought the lp when, let's say, you were seventeen and living in England. We don't need calculus to put your age at 67, making you my junior by eleven years. I don't know if that was your first exposure to jazz, but it must have been pretty close. I was 17, listening to Perry Como and Margaret Whiting when scouring the dial on the tiny red radio in our Utah kitchen I heard the voice of Jimmy Lyons who introduced me to Lennie Tristano, George Shearing and Woody Herman. That was Perry Como's death sentence.

That makes Goughie 14 years my senor. I must be the young un round here.

Hook, you're just beginning to have fun. At 53, or thereabouts, you've got 22 really good years ahead of you. After that, it'll still be good, but you'll spend as much time with your doctor as you do your wife.