Barre Phillips - For All It Is 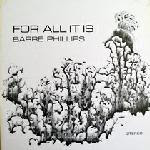 For this outing I went for something completely different. This once again is mined from the collection that I burned for a friend.

Back about 1968, Barre Phillips recorded what was widely regarded as the 1st solo bass lp, Unaccompanied Barre. At this point Barre was already a veteran of several successful combos and an accomplished if unheralded bassist.
Feb. of 1971 brought about the 1st bassists duo lp with Dave Holland, cleverly titled Music For Two Basses.
Apparently Phillips' muse was running in high gear as just a month later saw the release of this posts gem, For All It Is. This record gathers together 4 bassists and a percussionist performing 7 original Barre compositions.

For All It Is taken from a vinyl copy of Japo Records 60003.

I can't be as locuacious as Sexy has been.
Thanks, it is a wonderful document of a most creative time, there was a bass choir and an ochestra de contrabass, kind of remember, but the team here could hardly been improved (having the ill-fated Stu Martin is a bonus too). Thanks

thanks for posting this!