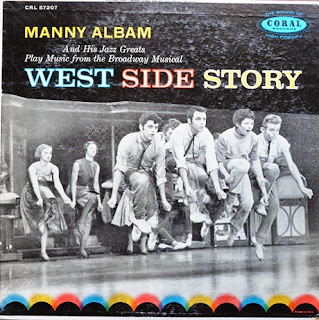 Manny Albam gathers some buddies and records what is essentially a big band recording of the most influential soundtrack from my teens. When I was just a lad I didn't realize how this soundtrack would work it's way into the very fiber of my being. It resides there to this day, just waiting to be shaken awake occasionally. You can't tell me you don't find it so yourself.

Did I mention that Albam and friends pulled it off? Cuz they did.

Manny Albam and his Jazz Greats

Posted by Hookfinger at 6:57 PM

Here's what you're looking for...

thanks. bob brookmeyer sold it for me. cheers. -alfred venison

I gotta say, I love the album. This is fine jazz arranging. Actually, it doesn't get better.
For me this has the same special arranging quality as the three musicals the Mastersounds did. The very best.
Thank you.

The musical definitely has a special place in my heart. I'm looking forward to this.